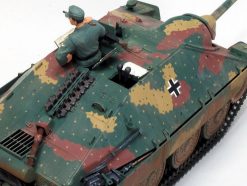 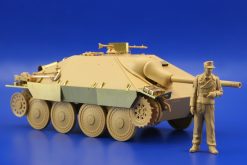 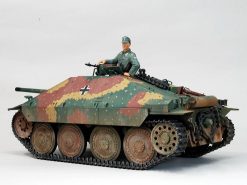 Already available as a 1/48 scale MM series kit, Tamiya now responds to the requests of military modellers and announces the release of the German Tank Destroyer Hetzer Mid Production in the 1/35 scale.

In 1943, the German high command ordered development of a new purpose-built tank destroyer to replace all of the interim vehicles like the Marder, and the Hetzer was quickly created to meet this requirement. Based on the Panzerkampfwagen 38(t), the Hetzer housed a crew of 4 in its low, compact hull. It was armed with a powerful Pak 39 L/48 75mm gun in a fixed mounting and featured sloped armor for enhanced protection. 2,584 were produced by May of 1945, and modifications were continually added during production, leading to differences between early, mid, and late production models.