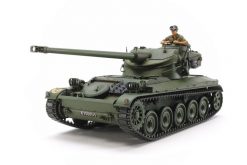 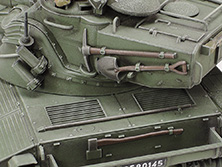 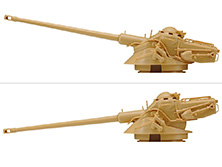 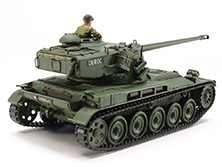 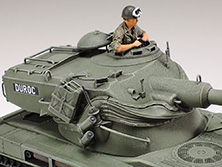 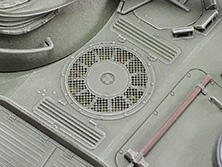 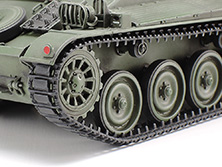 Vive la Différence!
While designed to be light enough to transport and deploy overseas at short notice, the French AMX-13 light tank was still able to mount a 75mm main gun; that it could handle the powerful 75mm weapon was thanks to a 2-piece oscillating turret, with the lower half acting as a base and providing rotation, and the upper half (complete with gun and autoloader) moving to give elevation. It squeezed a top speed of 60km/h from the 250hp front-mounted gasoline engine. Nearly half of the 7,700 produced between 1952 and 1985 were exported to foreign forces; those that remained in French service typically were deployed in reconnaissance units within armored divisions until they were withdrawn in the late 1980s. This innovative tank design is now rendered in detailed Tamiya 1/35 scale, ready to make a difference to your collection!

About the Model
This is a 1/35 scale plastic model assembly kit of the French Light Tank AMX-13.
Length: 183mm, width: 72mm.
★Extensive examination of a real AMX-13 enabled this highly realistic depiction of the external form of the tank and its oscillating turret.
★The construction of the upper turret section offers intuitive, hassle free construction with a breakdown influenced by that of real tank.
★Marvel at authentic depictions of the turret canvas cover, plus hull and turret cast metal surfaces.
★Realistic parts capture jerry cans and other accessories.
★Belt parts recreate rubber pad type tracks.
★Comes with commander torso for turret, and 2 French Army marking options