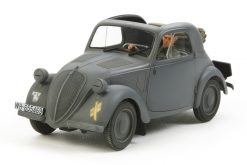 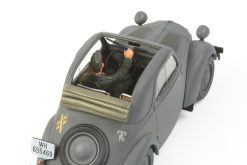 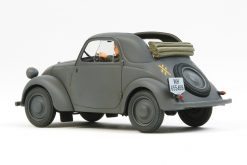 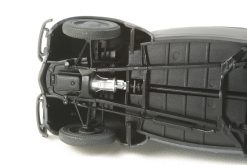 The Simca 5 was a small passenger car which debuted in March 1936. It was almost identical to the Fiat 500 Topolino as the car was actually designed by Fiat. The car was equipped with an independent front suspension, a 4-speed transmission, hydraulically-controlled drum brakes, and a 12-volt electrical system. At the time, the car was meant to be affordable for the French public, in the same way that the later Volkswagen Beetle and Fiat 500 brought inexpensive private motoring to the masses in Germany and Italy respectively. It was also very fuel efficient. Many were in use by the time WWII began, and the German Army captured large numbers of them when they occupied France. These were pressed into military service as staff cars for transporting personnel and liaison duties. Over 46,000 Simca 5s were built by the time production ended in 1946.
The Tamiya model kit is an exact replica that can be built and detailed using Tamiya fine finishing supplies. 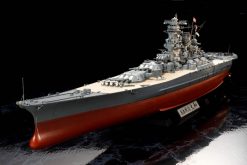